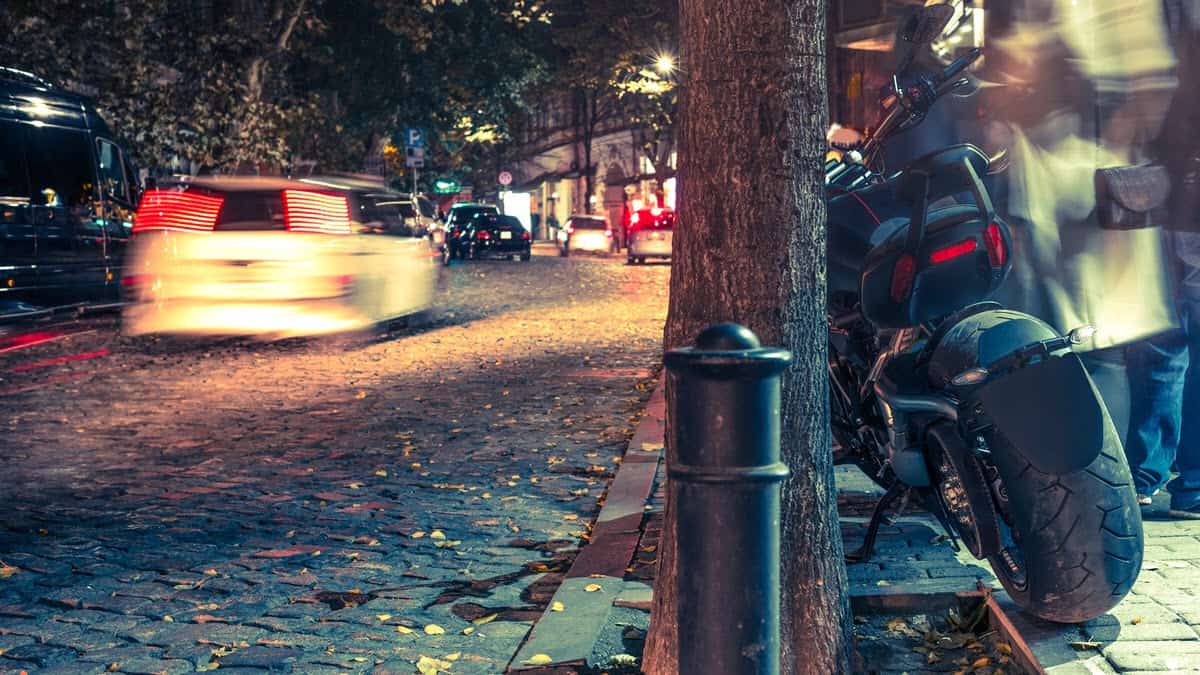 How likely is it that someone will steal your motorcycle this year?

The answer is, we won’t know precisely till sometime next year! Reports aren’t done until the year is over.

However, we will be able to draw conclusions about the more or less current state of motorcycle crime within the next few months, once the data from last year gets processed and systematized.

In the meantime, let’s comb through the previous several years (2017-2021) and see what could be in store for us.

But first, a bit of context.

Bike Sales: Down and Up, Then Down Again

Motorcycling as a hobby or form of transportation has generally seen a resurgence in popularity over the past decade or so.

Biking had plummeted as a result of the 2008 financial crash. The motorcycle industry was not immune to the recession. New bike sales fell off a cliff with riders opting to downsize their fleet and get back into their cars or just hang on to their older models.

Things began to slowly pick up at the turn of the decade with manufacturers investing ever increasing amounts into R&D in the hope of tempting people back onto two wheels.

And it worked. Yamaha took the world by storm in 2013 with their MT/FZ 09, following a year later with the hugely popular MT/FZ 07, both of which were a sales success.

The best part was that these bikes were affordable and therefore accessible to the masses.

Fast forward to today, and things seem to have gone south!

And it happened overnight too. Not surprisingly, the pandemic skyrocketed the sales in 2020 and 2021, when people resorted to outdoorsy hobbies in droves. But then, as yet another recession started breathing down our necks in the last quarter of 2022, sales went down by almost 6%. (Except for electric bikes, which went up 53%.)

Which isn’t in itself a bad thing as there are still some great finance deals out there allowing you to step onto a top of the line bike with a low monthly payment.

Still, the current state of affairs doesn’t seem to affect the global industry forecast, which is pretty bright. The worldwide industry revenue is on the rise, with some projections pinning it at nearly 170 billion dollars in 2027. That’s up almost by a third when compared to 2017!

But as with anything, this increase in value has started to attract the wrong sort of attention. Make no mistake: bike theft has always been a problem but we can’t help but think that an increase in values have contributed to the issue.

Each stolen bike is one too many, if you ask the biker who just suffered the misfortune of not finding their two-wheeler where they last left it.

But in this article, we’re talking numbers. They may be blunt, but they are the only way to paint a clear picture on how (un)likely you are or could be to experience this plight.

And from 2017 to 2019, it seemed that a great many motorcycle thieves just went to sleep.

According to the National Insurance Crime Bureau (NICB), 46,467 motorcycles were reported stolen back in 2016, a 2% increase on the previous year. This accounted for 1 bike being stolen every 11 minutes across the country.

From this, we can conclude that supersport or sport bikes are at the top of the most desirable list.

As always, there appeared to be a seasonality to the thefts, showing an increase in the summer months of June, July and August. This makes sense, of course: more bikes are on the road that time of year. And if there’s one thing we know about people who steal for a living, it’s that they tend to be in the know about such trends.

The figures were not quite as bad as the UK (as you’ll see below), but there was clearly room for improvement. An anti-theft device such as ground anchor and security chain is always going to be your best line of home defense with high quality motorcycle disc locks a great option for when you’re out and about.

Just when it seemed like we could take a breather at the 4-year slow but steady decline in motorcycle thefts, there came the year of the pandemic.

Was it because more people than ever took to an outdoorsy lifestyle? Or because they worked from home, which is where most stolen vehicle cases traditionally happen?

Whatever the reason, motorcycle theft rates went up by nearly a third, setting a 10-year record! More than 53,000 more bikes didn’t get to meet their riders at the end of the day. Worse yet, more than half of those stolen bikes were never found.

As in the previous years, California remained the holder of the infamous record, with 17% of all reported thefts, followed by Texas and Florida.

But what about brands? Honda and Yamaha remained most attractive, followed by Kawasaki.

None of these reports have yet seen the light of day as of this writing (January 2023).

The latest data were released back in August 2022, and they painted an even bleaker picture. Thefts were up a whopping 26% from 2019!

We can’t really know whether the numbers will keep soaring, and for how long. Be that as it may, one thing is certain. If you’re a motorcyclist, you’d better beef up your motorcycle security. And maybe even level up your motorcycle insurance, if you can afford it.

Let’s take a look into a (relatively) recent past.

A total of 128,644 bikes were registered in 2016, a staggering 11.7% year on year increase over 2015. Along with motorbikes that had been previously registered, this made for a staggering 1,11 million licensed motorcycles in England.

The number still lingered in the last quarter of 2020.

Now contrast that with the fact that back in 2016, more motorbikes were stolen than were sold new. The problem had become so severe that a report was commissioned by the National Crime Intelligence Service and passed on to local law enforcement.

To put the problem into financial terms, £3,000,000 worth of motorbikes are stolen in the UK every single month. Scooters, mopeds or top of the line sports bikes, it doesn’t really matter.

In fact, scooters and mopeds are a popular target in London as they are the vehicle of choice for thieves looking to steal your phone, cash, or any other goods they can get their hands on. As you can see in the video below, moped theft has become an endemic issue in urban areas of the UK.

If left unsecured, they are taken in seconds and pushed or ridden off, either to be sold whole, for parts, or used in further crime.

On a more sinister note, recent years have also seen the rise of extreme violence being used as an aide in bike jackings or to deter onlookers from intervening when they see a bike being taken. This can range from brandishing screwdrivers, angle grinders or the use of acid to inflict burns on victims.

In response, we’ve seen reports that a number of vigilante groups have formed with the aim of tackling these motorcycle theft gangs head on. We do not condone vigilante action and urge all victims to report incidents to the police.

Despite these terrifying figures about street crime and violence, the fact remains that over 80% of motorbike theft cases happen at home. Not in the dark alley, and not while parked in front of a highrise corporate building.

In other words, your motorbike isn’t safe while tucked in to sleep in the garage. Not unless it’s locked with a chain lock to an immovable object such as ground anchor.

Lock it down and lock it good! And, if possible, equip it with an alarmed disc lock so the opportunistic thief has to make themselves heard.

How easy is it to steal a motorcycle?

It’s as easy or as difficult as you make it to be.

To be perfectly honest, a skilled motorcycle thief can snatch any motorbike if given enough time and tools.

Luckily, that’s hardly ever the case. Any theft prevention measure or tool makes it harder and riskier for them. Typically, they will scout the terrain for easiest targets. So it’s up to motorcycle riders to make their vehicles less appealing to the bike thief.

If you don’t believe us, take it from the horse’s mouth.

“basically you want it to appear to take a long time to steal. $100 disc lock on rear wheel, $150 chain/lock combo through hard parts not chain and not wheels, if it has to be a wheel put it through the rear one, lockable bike cover, and keep your steering locked,” writes an ex-thief and chop-shop operator in a Reddit’s Ask-Me-Anything session. Your steering lock is NOT enough.

(Yes, I was surprised too that you can find something like that on the internet.)

Is it worth reporting stolen bike?

Yes. In fact, if you report it, there’s nearly 50% chance that the police will manage to get it back!

Reporting a stolen ride is not the only thing you should do, though. Take a look at this step-by-step guide that will teach you exactly what to do if your motorcycle gets stolen.

Will insurance cover a stolen motorcycle?

It will, but only if you have a comprehensive insurance policy, and if you don’t break any stipulations from the contract.

So, any lower-level coverage (e.g. collision) won’t cut it if your bike gets snatched.

A full insurance isn’t cheap, so you may want to check it with your insurance company.

But even if you can’t afford it, you can do at least something to deter potential thieves. Something is always better than nothing!

It looks like we’re set for another record year for thefts. There is no substitute for effective motorcycle theft protection. You can’t always keep your eye on your bike so make sure it is secured properly. Your insurance premiums and your bank balance will thank you for it.