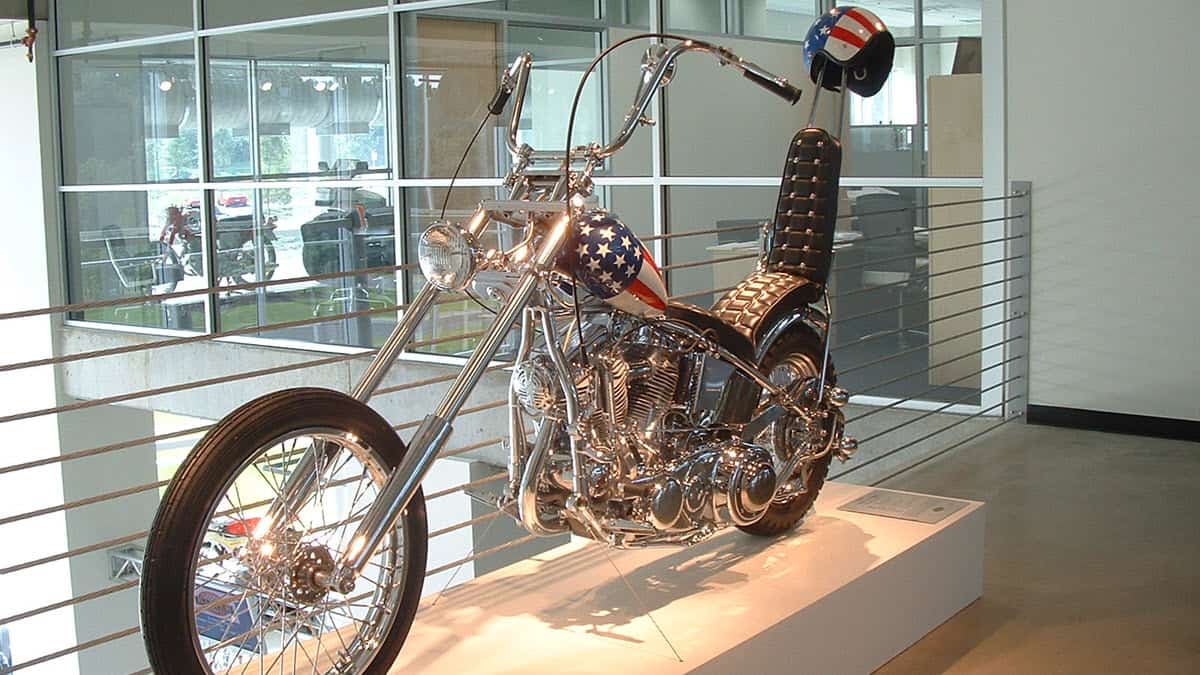 The Panhead and Shovelhead are two Harley Davidson V-twin motorcycles. They appear one after each other in the H-D line-up between the years 1948 to 1984.

As was the Motor Company’s policy, each successive new model was a natural evolution of the species, with a list of improvements over the previous model.

Both Harley-Davidson models brought many innovations to the table and continue to attract their own army of die-hard fans. Here, to help you make up your mind, is the low-down on each model.

With WWII in the rearview mirror, America embarked on a period of incredible economic expansion. As buildings got higher, and cars got longer over in Milwaukee, Harley-Davidson needed an upgrade for their aging Knucklehead.

With a new network of roads emerging, Harley was looking to design a motorcycle capable of munching the miles. That bike was the Panhead.

With aluminum cylinder heads and internal oil lines, the new reliable Pan not only ran cooler but also managed to keep most of its oil inside the engine.

The Panhead also saw a major overhaul of the valve gear, introducing the hydraulic lifter. This design quietened the top end and made maintenance easier. Yet despite these technical upgrades, the Panhead still produced the same 50hp output of the oily old Knucklehead.

Part of the cylinder head upgrade included the use of a new pressed steel rocker cover. Shaped like a cooking pan, this component gave the bike its name. It also provided Harley-Davidson with one of the most iconic-looking engines in its history.

Over the Panhead’s 18 year-run, changes to the frame and suspension revolutionized the look and handling of the Harley-Davidson Big Twin forever.

Within two years of its launch, the traditional springer front end was replaced by telescopic units. The new shrouded forks provided more comfort due to increased damping.

By 1958, the back end of the Panhead received the same radical comfort upgrade with the introduction of twin shock absorbers. Over that same year, improvements came thick and fast. They included the introduction of a handlebar mounted clutch, footgear change and hydraulic drum brakes.

When the Panhead’s production run came to an end in 1965, it was relatively reliable, comfortable and capable of clocking up high mileage. The engine also boasted an electric starter. But these improvements plus the suspension upgrades turned the Panhead into a 700lb+ land whale.

Pushing out around 55hp, the Panhead had gone about as far as it could. The British bike invasion was well underway and the writing was on the wall for one of Harley-Davidson’s most iconic models.

Enter the Shovelhead, the king is dead, long live the king! The Shovelhead took over from the Pan in 1966. And if you thought the Panhead was a roller coaster ride in terms of innovations, the Shovel will have you gripping the bars even tighter.

The H-D hype machine went into overdrive with bold promises of more performance and refinements. The result was a jump in sales of new Shovelheads.

Unfortunately, the reality was far from perfect. The paltry additional 5hp coaxed from the engine came courtesy of higher compression pistons and cast aluminum cylinder heads borrowed from the Sportster.

The new head design resembled an inverted coal shovel, hence the name. But the bottom end was a straight lift from the Panhead. The new bike ran hot, the engine leaked oil and the extra performance merely compensated for the additional weight, which now bent the scales at a colossal 783lb.

Close to the Edge

While it was all smiles, at the factory behind the scenes, an ongoing funding crisis created a brick wall that H-D was riding full throttle towards. If American Machine and Foundry (AMF) had not bought the company in 1969, Harley-Davidson may have disappeared into the dust.

AMF made their fortune manufacturing ten-pin bowling equipment and with little interest in motorcycles, during their decade-long ownership quality control suffered. But, and isn’t it always a big but, during that period thanks to a junior designer named Willie Davidson AMF-Harley-Davidson produced a model that would lead to the company’s success.

The bike in question, the Super Glide, was in fact a parts bin special made up of an FLH frame and engine married to a Sportster front end. The only downside was the worst fiberglass seat and tail unit ever fabricated, earning it the nickname ‘boat tail’. It was dumped after the first year in favor of a banana seat and Sporster fender and the Super Glide became a soar-away success.

The super Glide is often called the first factory custom and this motorcycle paved the way for some of Harley-Davidson’s best-selling and well-loved models. These included the Wide Glide, Fat Bob, Sturgis, Lowrider and Dyna Glide.

Over its production run, the Shovelhead increased engine size to 80ci (1340cc). It also gained a five speed gearbox, wide front forks, twin gas tanks, forward controls, disc brakes, as well as kevlar belted primary and final drives. The list of tweaks and innovations seemed endless. In 1984, the Shovelhead ran out of steam, and the Evolution engine became the new kid on the block. That’s a whole other story though!

What is a Panhead?

A Panhead is a V-twin engine overhead valve motorcycle made by Harley-Davidson between 1948 to 1965. The engine was available in 61ci and 74ci formats. It got its name from the cooking pan shaped rocker box covers.

What is a Shovelhead?

The Shovelhead, so called thanks to its shovel-shape rocker covers, took over from the Panhead in 1966. The overhead valve V-twin engine, produced in 74ci and 80ci configurations was succeeded by the Evolution engine in 1984.

From a nostalgia viewpoint, the Panhead may be the best looking H-D engine ever built. It is most likely the most recognized motorcycle in the world too thanks to the Captain America bike in the ‘Easyrider’ Movie.

From an innovation viewpoint, the Shovelhead created some of Harley’s most popular models. It also provided the baseline for some of the factory’s biggest technical innovations.