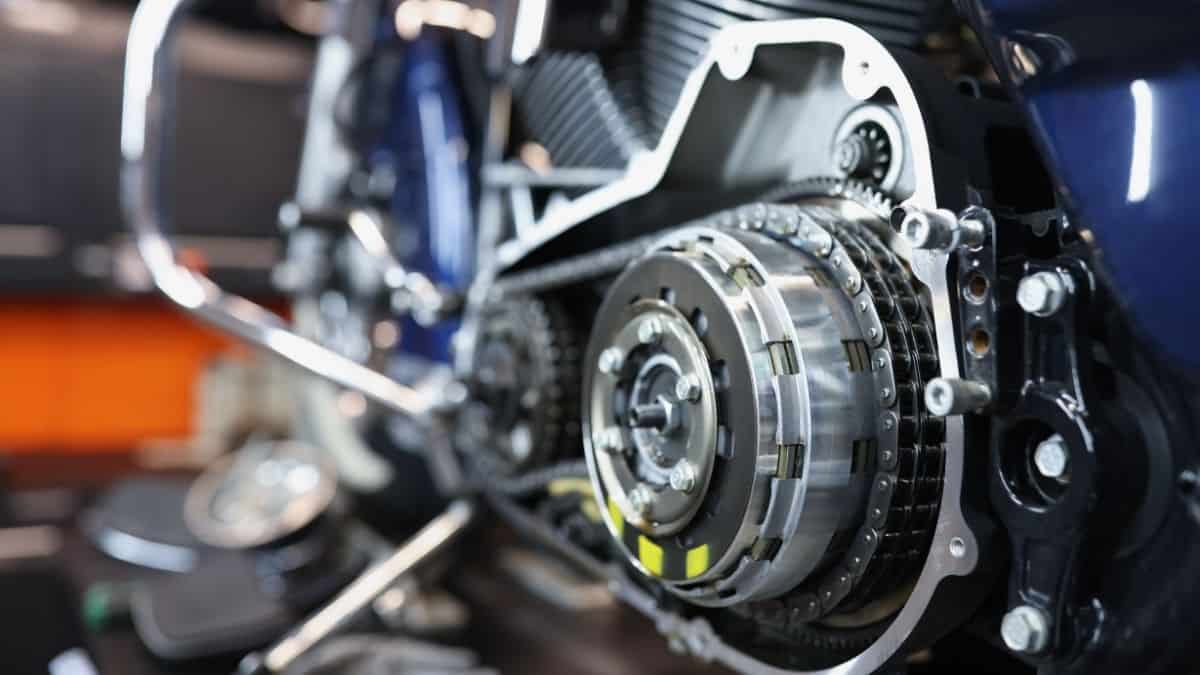 Ask anyone to name the most mysterious component of your motorcycle.

Odds are, most people will point at the clutch system.

No matter how many times you engage or disengage the clutch in a day, not many riders tend to look into its working mechanism.

And without knowing that, we can’t talk about adjusting the clutch engagement point.

What is Clutch Engagement Point?

Whether you are moving from standstill or rising through heavy traffic, clutch control is a must to ensure a smooth ride.

And to operate your clutch like a pro, you need to have a clear feel about the clutch bite point.

But before we go into that, let’s find out how does the clutch function.

Why does the motorcycle need a clutch?

Well, you know the score. A motorcycle is powered by an engine, which is connected to the rear wheel.

However, if the engine remains connected to the wheel at all times, you won’t be able to shift gears or stop the motorcycle without stalling.

The purpose of the clutch is to break the connection between the engine and the rear wheel as needed.

The power from the engine is transferred into the clutch housing after being converted into rotary motion by the crankshaft. The clutch transfers power to the input shaft of the motorcycle gearbox. This goes into the rear wheel through the output shaft of the gearbox.

To make things simple, let’s assume the clutch has two flat plates. In reality, the system is more complex and has a clutch pack that consists of multiple plates, a pressure plate, and an inner hub.

The clutch lever is connected to this system with an actuator arm that brings the plates together or pushes them apart.

As the clutch lever is released the mechanism pushes the plates and gradually increases the frictional forces acting between them. This transfers the engine power to the wheel.

The reverse happens when the lever is pulled back. The engine keeps on running, but no power is transferred to the rear wheel as the clutch plates are disengaged.

Clutches can be cable operated or hydraulically operated. Cable-operated clutches use a Bowden cable which has strands of steel cable enclosed by a sheath.

Hydraulic clutches use a clutch fluid and a cylinder to develop the pressure on the plates. They offer better durability and require less maintenance.

Have we got that straight?

Time to come back to the issue of the clutch engagement point or bite point.

The bite point is somewhere midway between the fully released and fully squeezed position of the lever. This is the point when the lever is being released and the plates start connecting. The power from the engine starts reaching the rear wheel at this point.

This is why you need to be smooth while transitioning through the engagement point to prevent stalling of the motorcycle. Once you crossed that point, you can release or engage the clutch as quickly as you want.

The bite point can vary from one bike to another depending on the effective travel of the clutch operating lever and the clutch system design. It also depends on the extent of wear on the clutch plate and how well maintained it is.

Note: If you run your bike with a partially engaged or disengaged clutch, the clutch plates will wear away much faster.

Many riders slip the clutch by holding it at the bite point longer than necessary. This too will result in excessive wearing of the clutch plates.

Now, there’s one more term that you need to learn about- clutch freeplay.

Freeplay is the distance the clutch lever travels from the position of rest, till it meets some resistance from the cable. The measurement varies between motorcycles and you can measure this distance by using a measuring tape.

Generally, 10 to 20 mm of freeplay in the lever should be fine. But you may want to lower it as per your preference or hand size.

However, make sure to check the manufacturer’s specifications before adjusting.

In fact, veterans can adjust the freeplay and bite point entirely by feeling it, after placing the bike in neutral.

How Do You Adjust a Clutch Engagement Hydraulic Point?

If you want the clutch engagement point to bite correctly, you need the right amount of slack in the cable.

In case there is less slack, the clutch plates won’t be pressed together when the lever is released. If there’s excess slack, full disengagement of the clutch won’t happen when you pull the lever.

Needless to say, none of these conditions are good for the motorcycle, or the clutch plates.

As the clutch wears with age, the bite point can get shifted. This is when a clutch engagement point adjustment is needed.

The amount of slack in the clutch cable can be adjusted easily in two ways. There are adjusters located at the end of the lever and lock nuts near the engine block.

To adjust the locknut at the end of the lever, you will need to remove the clutch covers. Then you can release the lock nut and spin the adjuster to increase or decrease the slack.

If that doesn’t do the trick, you need to check another adjuster at the other end of the cable near the engine. This is a barrel adjuster to add some more adjustability to the cable.

Then you can come back to the lever end and play with the adjuster to slacken or tighten the cable.

Also, make sure to keep the clutch lever pivot and the cable lubricated to make your clutch last longer.

This is where hydraulic clutches are a hassle-free opinion. These clutches don’t need periodic maintenance or lubrication like the cable clutches.

As long as there’s fluid in the hydraulic mechanism, it will adjust the engagement point automatically as the clutch plate wears. So the bite point remains in the same position at all times.

Where should a clutch engage?

The clutch needs to have a few millimeters of freeplay and then engage as the friction between the clutch plates increase. The exact point of engagement will vary between motorcycles.

How do you adjust clutch engagement points?

In a cable clutch, the engagement points can be adjusted by using the adjuster located at the base of the lever. Other than that there’s another adjuster at the other end of the cable near the engine.

What is the biting point of a clutch?

The biting point or engagement point of a clutch in a motorcycle is the position of the clutch lever where the clutch plates make contact. At this point, the frictional forces between them start to increase. This causes the engine power to be transferred to the rear wheel through the gearbox.